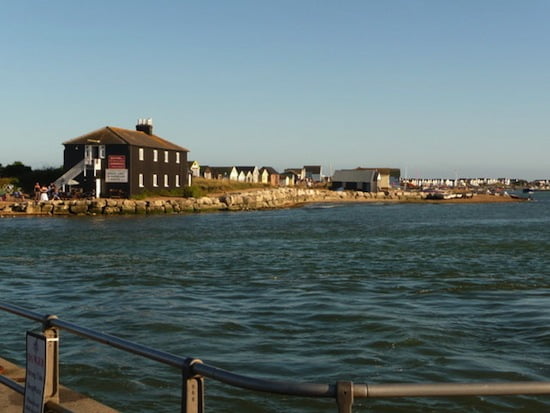 Mudeford is a former fishing village at the entrance to Christchurch Harbour in Dorset.

Lying at the entrance to Christchurch Harbour. The River Mude (which starts from Poors Common in Bransgore, Hampshire) and Bure Brook (which starts from Nea Meadows in Highcliffe, Dorset) flow into the harbour there. In recent times the boundaries of Mudeford have expanded and include modern housing. Approximately 4000 people now live in the area.

Historically part of Christchurch, Mudeford Spit was sold to Bournemouth Borough Council in 1935. It is the larger of the two features, the other being the Haven, that almost encloses Christchurch Harbour, leaving the water within to exit through a narrow channel known as The Run.

Formed by sand and shingle brought around Hengistbury Head by longshore drift and pushed towards the shore by waves from the east, the spit is the most mobile of Dorset’s geographical features. Prior to the construction of the long groyne at Hengistbury Head in 1938, it tended to grow steadily in a north-easterly direction and on occasion stretched as far Steamer Point and Highcliffe Castle; most notably in 1880. It has been breached a number of times naturally; 1883, 1911, 1924, 1935 and once deliberately in the 17th century when an attempt was made to construct another entrance to the harbour.

Mudeford Quay was constructed in the late 1940s. Prior to this, The Haven, as it was then known was surrounded by sloping beaches. The Run then was much wider than it is now and the area was subject to terrible erosion. So much so that Christchurch Council purchased the whole area in 1945. Five years later the area had been raised and reinforced with steel piles and concrete.

Today the quay which consists of The Haven Inn public house, a number of ex-fishermans’ cottages and a large car park is still used by local fishing boats as well as being a base for many water sports. A RNLI inshore lifeboat station is located on the quay.

Mudeford Quay Slipway
This slipway gives access to the harbour and the harbour entrance through Mudeford Quay car park. Seasonal charges apply from Easter to the end of September at weekends and public holidays, and everyday during July and August.
Trailer parking is permitted within the designated area adjacent to the slipway for up to 48 hours free of charge. Information: http://www.dorsetforyou.com/408915